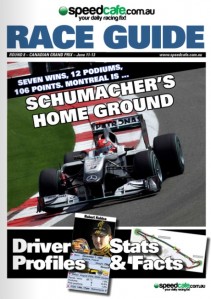 The latest edition of Speedcafe.com.au’s Formula One Race Guide is available now.

After missing a round of the F1 calendar last year, Canada’s romantic street course returns to the bill, much to the delight of teams and drivers a like.

But no man will be happier to see the Montreal track than F1 legend Michael Schumacher, who holds the circuit’s most impressive records. The German star, returning to F1 this year after a three season break, has won there seven times and finished on the podium 12 times in his 15 starts at the circuit.

Can he add another podium – or even a win – to his mega Canadian statistic bank? A few rounds ago, you wouldn’t have thought it would be possible, but with a revised Mercedes GP car and strong showings in the past two rounds, the seven-time world champ could deliver …

Also inside the Race Guide is exclusive race statistics, photos and comment from our team of experts.

Speedcafe’s Race Guides are brought to you by our Platinum partners Jack Daniels, IRWIN Tools, Pirtek and Orrcon Steel.