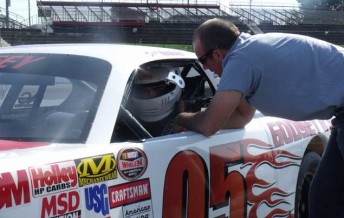 Cox, 16, drove a new MAM Late Model car at the famous short track yesterday as he edges closer to a future in the NASCAR competition.

Cox has moved from his hometown in Gunnedah, NSW to pursue a racing career in America. He has been competing in Midget oval races, as well as completing Year 10 of schooling. 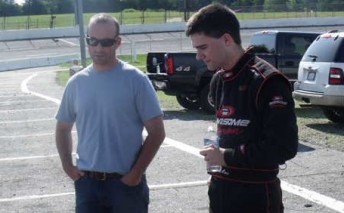 Ambrose was at the test with Cox, who completed 120 laps in hot conditions.

The two-time V8 Supercars champion, now racing for JTG Daugherty Racing in the NASCAR Sprint Cup, said that Cox did a good job in his first test with his team.

“Brad definitely has no fear in a race car,” Ambrose said.

“He did an awesome job, truly amazing. He has heaps of speed and a he’s a great talent.

“All you have to do is look at what Brad did in the Chilli Bowl (in a Midget) to know this guy’s got real talent.”

Cox was pleased with his first run in the car.

“This is fantastic, I love it,” he said.

“Marcos was great, he took me for a couple of laps of the track in his road car and showed me the fastest lines to take.”

Marcos Ambrose Motorsport crew chief Dave Adams said that Cox has what it takes to make it to the top.

“I have worked with young drivers that have made it all the way to Sprint Cup and honestly Brad has got more ability for his age than I have ever seen in any driver,” Adams said.