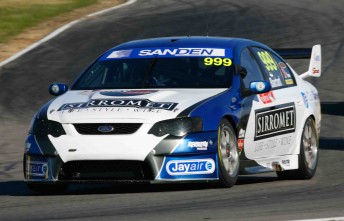 Sonic Motor Racing team principal Michael Ritter has remained firm on his long-held ambition to compete in the V8 Supercars Championship Series in the future.

The straight-talking team owner currently enters cars in the Fujitsu V8 Series, national and state Formula Ford championships and the GT3 Cup Challenge, and wants to expand on his racing endeavors to the highest level of Australian motorsport.

Ritter, who guided the likes of Jamie Whincup and Will Davison to Australian Formula Ford Championship wins, told Speedcafe.com.au that the move to the Main Series won’t be rushed, but it is in his sights.

“It’s definitely still on our radar. It’s our ambition and it’s part of a plan that we put together some time ago,” he said.

“We haven’t rushed any stage of that plan at any time.

“Our Fujitsu V8 Series program happened probably two years later than we would have ideally liked, but it took that time to get us in that position. But for many reason, it turned out to be the right time.”

Ritter says that there is still some vital elements within his team that he needs to sort before making the step, and he won’t let it affect the core of his racing operations.

“Firstly, it can’t happen at the expense of any of the other categories that we compete in,” he said.

“We’ve got some growth to do in terms of our staff, getting some people in a more experienced position to take a little bit more control of some of those areas.

“I don’t have a time frame on it. Obviously, one of the most major component of it is funding. It’s not the sort of thing that we’re going to go into underfunded or unsecured. Getting to that point for us is still some way down the track.”

With his Main Series plans in the back of his mind, Ritter is weighing up the future of his team’s current ex-Triple Eight Falcons BFs. The Sonic team has used them over the past two seasons and says that V8’s upcoming Car of the Future will play a big role in what it does with its chassis.

“The sort of investment required in that machinery out there, from a commercial view point, we need to maximising the outlay in the equipment,” he said.

“That means a minimum of two years, perhaps it will be three, depending what the market is like at the end of the year for those cars.

“Also what’s happening with the Car of the Future will have a reasonable bearing on our decision moving forward.”

While Ritter looks towards the future, Speedcafe.com.au conducted a handful of exclusive interviews with some of the high-profile drivers that have come through Ritter’s Sonic Motor Racing team. The interviews have been compiled into the video below. Enjoy!