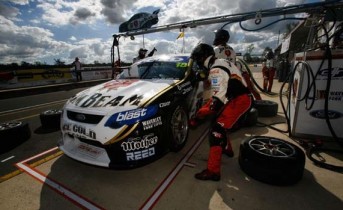 After two rounds of the softer ‘Sprint’ tyres, V8 competition returns to the harder control tyre at the Skycity Triple Crown in Darwin next weekend, with one set of ‘Sprints’ available for Sunday’s race only.

“I’ve won races on soft and hard compound tyres so there’s no reason why I can’t be competitive on both types of rubber in the ‘Top End’,” Courtney said.

“It’s possible we might clear out and run away from them again, regardless of what tyres we’re on. My team has momentum from four wins in-a-row so the pressure is back on the others to see what they can do.”

While Courtney is acknowledged as a Sprint tyre specialist, has won V8 races on the control rubber. He won a race at last year’s Townville and Sydney street track, and also took a win at the non-championship Albert Park race earlier this year.

He said he’s not worried about the change of tyre rules.

“I’m not worried by the change,” said Courtney.

“In fact, I’m feeling excited and keen to go because I had good pace on hard tyres early this season before my wins at Queensland Raceway and Winton.”