Daniel Ricciardo’s up and down Brno debut

Daniel Ricciardo’s up and down Brno debut 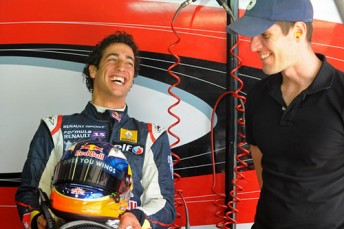 Daniel Ricciardo can still smile despite a difficult weekend at Brno

Daniel Ricciardo endured an up and down race debut at the Brno circuit in the Czech Republic over the weekend.

The Red Bull Junior driver led the championship entering the sixth round of the Formula Renault 3.5 Series after his sensational win on the streets of Monaco three weeks ago, but two disappointing qualifying sessions made his weekend a tough ask.

Ricciardo, 20, was hampered by yellow and red flags in the first qualifying session for Saturday’s race which put him in an unfamiliar 14th place on the grid. The West Australian could only salvage 12th place by race’s end and no series points.

On Sunday, Ricciardo found a better rhythm. He qualified down in 11th place but raced his way up to a fifth place finish, closing the gap to the championship leader to just three points after his main championship rivals also had difficult weekends.

Ricciardo ran in ninth place early in the race but a brilliant pit stop by his Tech 1 team saw him emerge in fifth.

Ricciardo said that Sunday’s race made up for the disappointment of Sunday.

“It was good to finally get some points on the board,” he said.

“My race pace was actually quite good today and I was able to gain some places at the start and during the pit stop window by putting the guys in front under pressure.

“It wasn’t the weekend it shouldn’t have been for us, so its positive that we’ve been able to close the gap in the points standings despite that.”

Argentinean Sebastian Guerrieri won both races at Brno and moved up to third place in the driver’s title behind Mikhail Aleshin and Ricciardo.

Ricciardo will take part in a one-day test at the Brno circuit today before returning to racing action in Magny Cours, France in two weeks time.