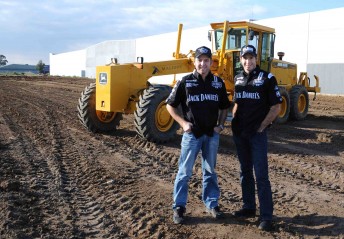 The team announced in February that its workshop would be extended, increasing the size of Kelly Racing’s facility to over 4000 square metres.

With the design of the extension now finalised, earthmoving equipment has moved in to begin the initial stages of construction on the new wing of Kelly Racing.

The new area of the workshop will house brand-new engine, paint, composite, machining, CNC and fabrication departments, allowing Kelly Racing to operate entirely under one roof in the same facility. Todd Kelly said that it was another milestone for he and brother Rick’s race team, which was only officially launched in March last year.

“It’s great to have things coming along with the new workshop,” said Todd.

“We have taken our time with the design phase of the redevelopment as we wanted to give all our team members a lot of input in terms of what they wanted the new place to look like and how it will be laid out.

“Now we have the earthmoving equipment rolling in and the dirt is starting to move around. Every single person in our team is really excited to see construction kick off and we can’t wait until it’s ready to open.”

The extension of Kelly Racing’s premises is expected to be completed in 2011.