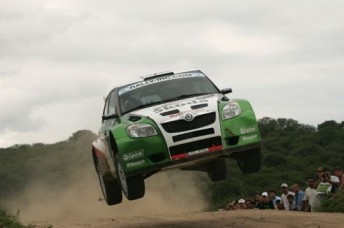 Juho Hänninen has strengthened his grip on the Intercontinental Rally Challenge (IRC) Drivers’ title with his second victory of the season at the Rally d’Italia-Sardegna.

Driving a factory Škoda Motorsport-run Fabia, the Finn took a slender lead on the rally’s ninth stage and pulled clear when Kris Meeke (Peugeot) crashed out on stage 10.

Hänninen’s win means he has finished on the podium on all five rounds of the IRC so far this season and is now 11 points clear in Drivers’ title. Team-mate Jan Kopecký finished third behind Peugeot driver Paolo Andreucci.

Meeke was 3.6-seconds behind Hänninen when he understeered off the road on a sweeping left-hand bend. His Peugeot UK 207 ended up on its side and would go no further. It was a disappointing end to an impressive drive by the defending IRC champion, who claimed two stage wins during the course of the event.

Fellow Brit Guy Wilks will be out for at least two months after suffering two fractured vertebrae when his Škoda UK Motorsport-run Fabia left the road at high speed on the opening stage of the event.

Also on the sidelines after the opening stage was Portugal WRC winner Sébastien Ogier who suffered a puncture before overheating the engine of his Peugeot.

Ogier was drafted into the event to help the French car maker in the Manufacturers’ title. However, his retirement along with that of Meeke, plus the win for Škoda has the Czech manufacturer 34-points in front heading to the Ypres Rally in Belgium 24-26 June.

IRC Drivers’ Championship after 5 of 12 rounds

IRC Manufacturers’ Championship after 5 of 12 rounds