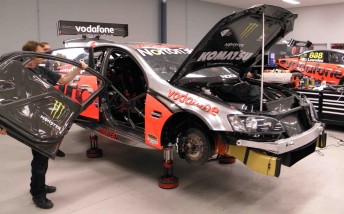 Jamie Whincup’s brand-new TeamVodafone Holden Commodore VE is nearing completion and is being touted as the most refined and lightest of all the Triple Eight-built Commodores.

The new VE (Chassis 027) will be shaken down at Queensland Raceway this Thursday under V8 Supercars’ 20 lap new-car rule. It will then be debuted in the next round of the Championship Series at Hidden Valley Raceway in two weeks time.

According to Whincup’s race engineer Mark Dutton, the champion team has spent most of its energy focused on weight saving with the new car.

“The biggest question we’ve asked ourselves as we’ve built this is ‘how do we get the weight down?’ Dutton told Speedcafe.com.au. “Every nut and bolt that goes on, every component, our guys have been told to think twice about it and think about how it could be lightened in anyway.

“It won’t really change the car’s characteristics as such but if we’ve saved a couple of kilos, we’ll be pretty happy. It will just make the car nicer.

“Although it seems like we haven’t had much time to build this, we’ve spent a lot more time on the nuts and bolts – ensuring they are totally correct length. Just basic weight saving, and that’s the big design outcome that we’ve been working on this one.

“We’ve also made a few refinements in how we adjust the suspension. It’s no different geometry as such, but if we want to test anything, we can do things a little bit quicker and easier.”

Dutton admitted that the champion team still has a little way to come to understanding the Commodore chassis – especially on the category’s Dunlop Sprint tyres.

“We’re still learning how to make these cars handle,” he said.

“Obviously James Courtney gave us a bit of a spanking on the soft tyres, so we don’t have the whole package, the whole picture yet.

“We hope there’s a bit more speed to come. There’s more and more talk about the soft tyres being used more frequently in the future, so we can’t have a weakness like that.

“This year, the Sprint tyre is not at every round, but it’s still a fair chunk of the season, and to win a championship, you can’t have a weak link.

“James has now had two good races, and we’ve had our two bad ones. We’re not miles off to any extent. We can get the single lap pace out of it, but the next step that we need to take is with tyre life.”

If Whincup does win this year’s V8 championship, he will be the first person in the history of the Australian Touring Car Championship/V8 Supercars to win consecutive titles in a different make of car.

While the main TeamVodafone crew prepare the new VE for its 20 lap shakedown test this Thursday, Whincup, team-mate Craig Lowndes and a large portion of the Triple Eight squad are currently in West Australia, completing ride days and corporate functions for Vodafone.