Valentino Rossi’s broken leg rules him out of title

Valentino Rossi’s broken leg rules him out of title 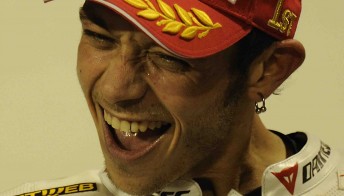 Valentino Rossi is out of the MotoGP world championship fight after doctors say that is broken leg will mean he will remain on crutches for six weeks.

It will mean that he’ll miss at least the next three Grand Prixs in Great Britain, Assen and Catalunya

The Italian underwent a successful operation at the Centro Traumatologico Ortopedico (Centre for Orthopaedic Trauma) in Florence, Italy on Saturday afternoon to repair the fractured right tibia he sustained in a crash in the Saturday morning practice session at Mugello.

Rossi was thrown from his Fiat Yamaha M1 bike as he went through Turn 13, with the team citing temperature of his tyres as a likely factor in his highside crash.

In a statement, doctor Roberto Buzzi said that a two-and-a-half hour procedure was successful, however, he won’t be able to stand on his leg for six weeks, with no defined return date.

“The alignment was good and the bone is now stable. The wound remains open, as is usual in these cases, and it will be stitched in the next few days with another short surgery.

“We are confident that Valentino will be able to leave the hospital in a week to 10 days, able to put weight on the leg with the aid of crutches.

“It is difficult to say how long the post surgery rehabilitation will take, we need to evaluate the progress of the patient and also what the X-rays will show. But I think that we can reasonably think of six weeks of partial weight-bearing with crutches, after which Valentino needs to be re-evaluated, according to his feedback and further x-rays.”

“It was a very sad day today for Yamaha and the Fiat Yamaha Team, seeing Vale in so much pain and seriously injured for the first time in his career,” he said.

“It is especially tough for Vale to have this accident at his home Grand Prix and this will surely be a huge disappointment for him and for all his fans here at the Mugello circuit and around the world.

“As a team we are very deflated right now because we had our two riders challenging for the Championship lead and now that challenge is over – at least for the immediate future. We wish Vale the very best for a speedy recovery and hope to have him back with us as soon as possible.”

Repsol Honda rider Dani Pedrosa qualified on pole for the race, to be held at the Italian venue tonight. The race will be broadcast live in Australia on ONE HD at 9.30pm (check your local guides).