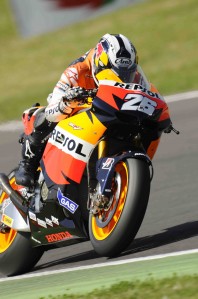 Dani Pedrosa was faultless at the front of the MotoGP field at Mugello today, taking victory at the Italian Grand Prix.

The 24-year-old Repsol Honda rider led every lap of the race, decimating the pack in one of his most dominant MotoGP race victories of all time.

Fiat Yamaha‘s sole rider at Mugello Jorge Lorenzo took second place and increased his lead in the world championship in the absence of his team-mate Valentino Rossi, who broke his leg in the second practice session yesterday.

American Ben Spies (Yamaha Tech 3) made a brilliant start and ran as high as fifth before slipping back to an eventual seventh.

Nicky Hayden was the biggest loser from the race, falling out early on while battling with Melandri.

The next round of the world championship will be at Silverstone for the British Grand Prix in two weeks time.