Ryan Briscoe to start from pole in Texas

Ryan Briscoe to start from pole in Texas 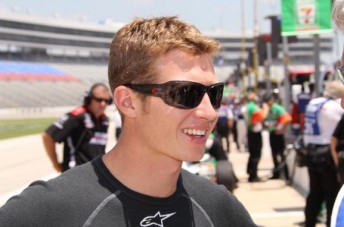 “I think we can just call it a win and not go out (tomorrow),” joked Briscoe.

“I wish. It’s a great feeling to get the pole here. Thanks Dario (Franchitti) for falling off that little bit on the last lap.”

Franchitti, seeking to be the third consecutive Indianapolis 500 champion to win at Texas in the same year, was 0.0057s off Briscoe’s pace.

Power will start third for tomorrow night’s race ahead of Scott Dixon, which means that the top four starting drivers at Texas are all Armor All Gold Coast 600 drivers in October. Briscoe will race with the Toll Holden Racing Team, Franchitti with Jim Beam Racing, Power with Ford Performance Racing and Dixon with Jack Daniel’s Racing.

The other Gold Coast 600 driver in the IndyCar field, Alex Tagliani (Kelly Racing) will start down in 20th place.

See below for full starting order for this weekend’s race at Texas.