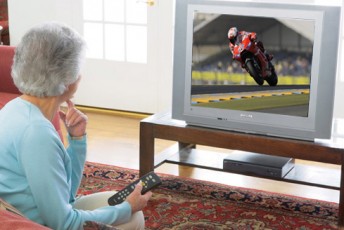 Watch Casey Stoner LIVE on ONE HD this weekend

This weekend’s LIVE TV action is centred on the MotoGP at Mugello in Italy where Casey Stoner and Ducati will feel they must deliver.

ONE HD’s exclusive coverage of the MotoGP World Championship gets underway with qualifying on Saturday evening from 11pm. Sunday night LIVE race coverage starts with the 125cc Grand Prix at 6.45pm on ONE HD. Moto2 is LIVE from 8pm and MotoGP takes the green light at 9.30pm.

The unique 2.5-mile triangular-oval on the edge of Pocono Hills in Pennsylvania will host the 14th stop on the NASCAR Sprint Cup schedule. The Pocono 500 gets underway LIVE on Foxsports at 2am Monday morning.

Just one week after the Indy 500 teams head south for the Texas 500. Coverage is LIVE on ESPN from 10am Sunday morning.

The Sahlen’s Six Hours of The Glen, part of the Grand-Am Rolex Series is LIVE on ONE HD from 4am Sunday morning.

The Red Bull Air Race series drops into Windsor in Canada and you can catch that LIVE on ONE HD from 3am Monday morning.

The NHRA is in Chicago this weekend and coverage of the United Association Route 66 Nationals can be seen from 3.30pm Monday afternoon on ESPN.

Other programs to catch

V8Xtra is on Seven at the new time of midday on Saturday. Other shows to look out for include Mobil 1 The Grid, AMA Superbikes, ANDRA Drag Racing and a full week’s coverage of practice and qualifying for the Le Mans 24 Hour can be seen on Eurosport from Tuesday.