Dean Fiore’s Ford Falcon FG will feature a new major sponsor and a revised livery for the next round of the V8 Supercars Championship Series at Hidden Valley Raceway.

Northern Territory-based business Argus Apartments Darwin has jumped on board as a one-off partner of the improving Triple F Racing. 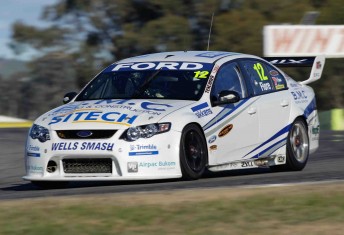 Argus Apartments Darwin was a minor supporter of Fiore’s race efforts last year in Darwin and has decided to up its backing this year after the upward progress Fiore has made in the past two rounds.

“They were on board with me last year just as a minor sponsor and they absolutely loved it and said at the time that they’d like to be involved more this year,” he told Speedcafe.com.au.

“The owner called me recently and asked what space I had available on the car, and now he’s ready to rock.

“We’re changing the scheme a bit. The front of the car is locked down with Sitech Trimble and B.M.C Welding and Construction, but the side has changed to suit Argus Apartments’ colours.

“Also, our truck is pretty plain at the moment, and he wants some signage on the that as well. We’ve got the big truck parade through Darwin, so that will be good for his presence as well.”

Fiore says that while he’d prefer to have a major sponsor locked in for the entire season, having one-off deals can have some benefits.

“Townsville was a really good round for us last year, and I’ve already got some partners locked in for that as well,” he said.

“The next few rounds are going to be pretty good for us, and then we’ve got a two month break before it leads into some pretty high-profile rounds like the Phillip Island, Bathurst, the Armor All 600 and then Homebush at the end. It’s a pretty strong case to put forward for the back end of the year.

“We’ve already had some indications from previous partners like Bing Lee and Panasonic that they are interested in those types of rounds.

“It’s not the ideal way to go about the season racing, but when I look back at it, the end result of the dollars rolling in is pretty good. It also keeps me busy between rounds to keep it ticking over.”

While more cash is rolling into the West Aussie-owned, Gold Coast-based team, results are starting to flow as well. At Queensland Raceway, Fiore grabbed his first top 10 in qualifying, followed by two top 20 race finishes. In the last round at Winton, Fiore again qualified strongly but was let down by an engine problem.

He says his improved results are helping with his sponsorship negotiations.

“People start to take more notice, especially when you get on the screen a little bit more. It definitely helps,” he said.

“We had a bit of an engine drama which I think definitely cost us a top 15, possibly a top 10 result, but you only get a sore neck from looking back.

“We had a positive test last Friday and I’m looking forward to Darwin.”

In other Triple F Racing news, Todd Fiore will race in the Fujitsu V8 Series at Townsville, and he could compete in the team’s spare Falcon BF chassis. The Triple Eight-built Falcon has sat on the sidelines for the season while they have concentrated on Dean’s main series entry, plus the Commodore VE that Todd and Paul Fiore have shared in the first three rounds of the Fujitsu Series. After Paul’s heavy incident at Winton three weeks ago, the team is trying to piece together the Falcon, pending the supply of fresh parts from Triple Eight.