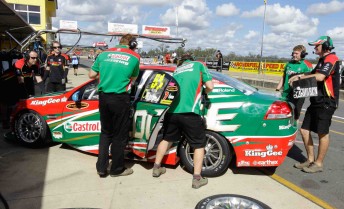 After a trying start to the year that currently sees PMM drivers Russell Ingall in 12th and Greg Murphy in 27th, Whincup completed a number of baseline laps at the test in an attempt to fast-track the progress of the Commodores.

Team owner Paul Morris told Speedcafe.com.au that the relationship between his team and Triple Eight remains strong, despite the disparate results the teams are having.

“We had Jamie (Whincup) come out and baseline the car for us on the test day. That proved to be something we could gain from,” Morris said.

“The way Roland (Dane) and his team go about car racing and react with the people they deal with is first-class.

“Our performance has got nothing to do with the way they do about their business – they’re just bloody good at it. When we have been in a position where we aren’t going so well, they have been there to support us.”