The Beach Boys to headline ‘600 Sounds’

The Beach Boys to headline ‘600 Sounds’ 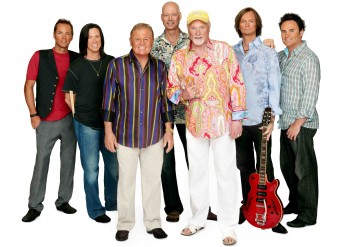 The Beach Boys will join a host of top-line Australian and International artists in three nights of shows on October 22-24.

The popular American band will headline Saturday evening’s entertainment program, which will also see The Baby Animals, Noiseworks, The Angels, Mondo Rock, James Reyne and Richard Clapton taking to the two stages of the Broadwater Parklands.

Before they do, Ian Carey (Ministry of Sound), Static Revenger featuring Luciana, The Potbelleez, Kid Kenobi and MC Shureshock, Hook N Sling and The Only will kick off the action on Friday night, while Empire of the Sun and Sneaky Sound System will be joined by The Funkoars to close out the festivities on Sunday night. 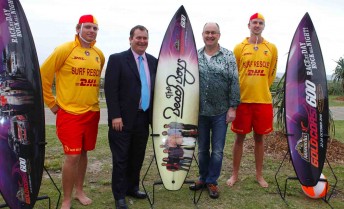 Surf Lifesavers Ashley (far left) and Bernard (far right) were on hand to help the Minister Phil Reeves and Tony Cochrane unveil the band that is all about sun, sand and surf

The Beach Boys, who have had four US number one singles, fit the 600 Sounds bill perfectly – some of their most popular songs are about the beach, the sun and cars!

The Beach Boys’ Mike Love said the band couldn’t wait to get onto the Gold Coast come October.

“We’re really excited about coming back to Australia,” said Love.

“There is going to be a lot of great music, as well as great racing, – the Rock and Race format is going to be exciting and we’re really happy to be headlining Saturday night.

“Our impressions of Australia go back to our early impressions of when we first went there back in the early sixties and I’ve always loved Australia, the beer, great girls, fantastic beaches, what’s not to like…so I give it a thumbs up, and a G’day mate!”

“The entertainment line up for 600 Sounds as part of the Armor All Gold Coast 600 is going to set the Broadwater Parklands precinct alight nightly across the event,” said Howard.

“World-class names from dance to rock to pop is set to hit the Gold Coast during this entertainment extravaganza which is a continuance of V8 Supercars’ highly successful Rock ‘N’ Race format.

“The admission for each night of 600 Sounds is included in the same day ticket price, and with a unique racing format during the day followed by the nightly entertainment that ticket is amazing value for money – for instance Friday night’s ticket – for a full day’s racing and six big acts that night – is just $49!”

“It’s hard to predict what will be bigger, the roar generated from the V8s charging through the streets of the Gold Coast or the one that will greet Rock ’n’ Roll royalty when the Beach Boys take to the stage,” Reeves said.

“The undeniable success of pairing high quality music acts with the pinnacle of Australian motor sport will yet again deliver a major boost to the South East Queensland economy, and we expect this year’s event to improve significantly on the $48 million generated last year.”

The Armor All Gold Coast 600 was launched recently at the Broadwater Parklands, where along with the Rock ‘N’ Race format, 18 international drivers from 12 countries were announced to pair with the V8 Supercar stars for the third endurance event on the V8 Supercar Championship Series calendar.

Tickets are now on sale for the Armor All Gold Coast 600, with Friday admission tickets starting from just $49 and three day passes from just $136, with each ticket providing admission to not only the day’s racing but also the same night’s entertainment line-up at 600 Sounds. Visit ticketek.com.au or call 132 849 for more information or to purchase.

Below is a list of artists confirmed for each night of the 600 Sounds festival.

Sunday
– Empire of the Sun
– Sneaky Sound System
– The Funkoars