The 21-year-old, who currently sits 10th in the Genuine Ford Parts Formula Ford title in a Mygale SJ09a prepared by Brad Jones Racing, got the chance to test the #8 Commodore VE around the rural circuit.

Williamson told Speedcafe.com.au that it was a great opportunity to see what driving a V8 Supercar is all about.

“I was in for about five or six laps and it was great,” he said. 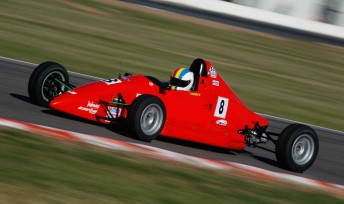 “Jason Richards had a pretty heavy work load during the day, but they decided they’d give me a few laps at the end of the day.

“It’s a continuation of my relationship with Brad Jones Racing. It’s a stepping stone to give me an idea of what the cars are like and what they do, and also for them to see how I went in it.”

Compared to his regular Formula Ford, Williamson says that he was blown away by the power of the V8.

“My impressions were “Gezz, it’s got a lot of horsepower!” he said. Tom Williamson gets strapped into the Team BOC Commodore VE

“I was told to take it easy, and I did. I guess my impressions were very similar to what everyone says. The car is a lot harder to drive, and it was a lot of fun. It has a lot of horsepower, it turns well, and it did everything pretty much better than anything else I’ve ever driven.”

Williamson was grateful for getting a chance in the BJR Commodore.

“I knew there was a possibility of driving it on the day. I was going to drive in the rookie test last week, but because the conditions weren’t that great, it was called off,” he said.

“Chris (Clark, team manager) told me to take my gear just in case, but we didn’t know it was going to happen. It was surprising in the afternoon to be called up and asked to put my gear on. It was pretty cool.”

With his first test out of the way, Williamson is now aiming towards a future in V8 Supercars.

“This is where I’d like my career to head. I’d like to see myself in the Main Game if possible. This is the first step and hopefully the first of many,” he said.

While his V8 test has been a highlight of his year, his Formula Ford campaign hasn’t gone to plan to date. After three rounds, he sits 10th in the title with a best qualifying result of fourth in the last round at Winton.

He says that he plans to turn that form around in the remaining events.

“It hasn’t been the best of starts to the year, but we’ve got pretty good pace everywhere we go. It’s hard to start the season with a new team and start from scratch with no data,” he said.

“We’re getting there, we’re making it go faster, and we’re showing pace, but I’ve just got to finish the first race of the weekend. We haven’t been able to do that yet this year.”

Besides his role with the Albury-based team as its Formula Ford driver, Williamson also prepares and manages Macauley Jones’ karting endevourous. Macauley is the son of team owner and former V8 racer Brad.

The next round of the Ford Genuine Parts Formula Ford Championship will be held at Darwin’s Hidden Valley Raceway (June 18-20).