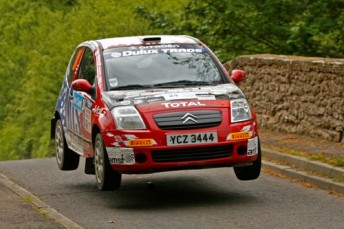 Molly Taylor on the limit at the Jim Clark Rally

Molly Taylor has finished fourth in the Citroen Racing Trophy and 17th outright at the tough Jim Clark Rally in Scotland.

The rally was contested over 210-kilometres of fast tarmac roads, with two super special and four road stages on Friday evening, followed by a further eight stages on Saturday.

After struggling with the loss of second gear on Friday, the 21-year-old went into the second leg of the event in 20th position.

With a new gearbox fitted for Saturday, she consistently improved her times to finish in a well-deserved 17th outright.

Taylor suffered a puncture on Saturday, as well as a couple of spins and stalls, but was happy with her final result.

“I tried a bit too hard in stages nine and ten and had a couple of spins and stalls as a result,” Molly said.

The Sydney-sider was pleased with the handling of the Citroen C2R2 Max and is gaining more confidence in the car at each outing.

Taylor is back on tarmac for the next round of the British Rally Championship, the Isle of Man International Rally on July 9 and 10.