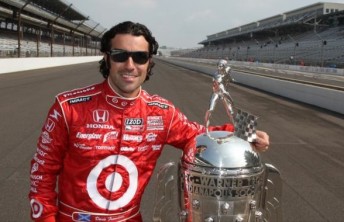 Dario Franchitti won yesterday’s 94th Indy 500 for Target Chip Ganassi Racing and will come to Australia in October for the Armor All Gold Coast 600 event, teaming up with Jim Beam Racing.

The team is yet to confirm who Franchitti will drive with (either Courtney or Steve Johnson) in the unique international-flavoured two-driver endurance race weekend. Considering Courtney’s title position, it would be assumed that Courtney would team up with one of Jim Beam Racing’s regular endurance drivers (Warren Luff or Marcus Marshall), leaving Franchitti to drive with Johnson. 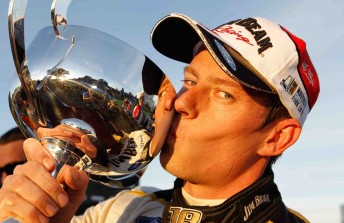 James Courtney with his trophy for winning the Winton V8 round

Courtney, a friend of Franchitti for more than a decade, says that having him in the team is a massive boost.

“Dario’s win at Indy is a huge coup for the Gold Coast event,” said Courtney.

“The Indy 500 is one of the world’s biggest races, so having the current winner driving a V8 Supercar on the Gold Coast streets in a few months is a big attraction. It’s going to create extra interest in the event around Australia and overseas.

“It will also be a buzz for our team, especially the young mechanics and crew members who can learn from watching and working with Dario and seeing how the Indy 500 winner does things.”

Franchitti has won on the Gold Coast before, winning the 1999 race, and Courtney says that he is keen to perform on the big stage again – but this time in a Jim Beam Falcon.

“Dario has raced IndyCars on the Gold Coast before so he knows it’s a big event,” said Courtney.

“He also knows our team is chasing a championship so he wants to do everything he can to help.”

The V8 championship leader said he had no doubts Franchitti would adapt successfully to driving V8 Supercars because of his proven record in other categories overseas, including touring cars and sportscars.

“Dario is best known for his IndyCar success, but he’s also been very competitive in other types of racing,” said Courtney.

“When you race professionally at his level it’s a question of getting time behind the wheel to adapt to the equipment your are racing.”

The next event on the V8 Supercars calendar is at Hidden Valley in Darwin (June 18-20), while the IndyCars will be back in action this weekend in Texas.