Tiago Monteiro has given his first drive of a V8 Supercar the thumbs up after getting seat time in Tony D’Alberto’s Centaur Racing Commodore VE at Winton Motor Raceway today.

The Portuguese driver completed close to 40 laps today, getting up to speed with the team that he will drive for in the revamped Armor All Gold Coast 600, where 18 international drivers will pair up with Australia’s V8 Supercars teams. 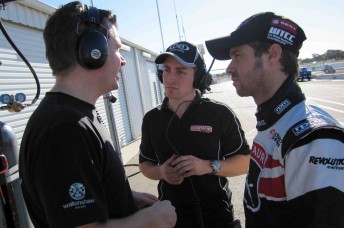 Monteiro is the first of the international drivers to come to Australia specifically to get laps in preparation for the Surfers Paradise event (October 22-24).

He told Speedcafe.com.au that he highly enjoyed his first day in the car.

“I’m enjoying it a lot, to be honest. My first impressions are great,” he said.

“The car is as much as I was expecting. It’s got lots of power! The biggest difference and the biggest shock is the locked diff. Therefore the turn in is quite good, but the middle is a bit strange, a bit difficult with the weight of the car. You really have to use the power of the car to make it turn, so that’s a very different philosophy.

“With so much power, you have to really control it. It’s really nice. I like the kind of attitude the car produces.”

Monteiro thanked the team for experience, saying it will no doubt help him in the October street race.

“The team has been very helpful. Tony and all the guys have been amazing. They’ve made me feel very comfortable and giving me as much information of possible. They’ve given me so many details and tips, and that has made my life a bit easier,” he said.

“I’m not getting too excited with the car. I’m just taking it step by step and trying to improve in every run. But it’s definitely a good experience.”

Monteiro, 33, currently competes in the World Touring Car Championship, driving for SR Sport, which campaigns diesel-powered SEATs. Fellow WTCC competitors Andy Priaulx and Yvan Muller, who both have significant experience in V8 Supercars (and will both race on the Gold Coast), gave Monteiro pre-test tips, and he says that their assessment of the cars were spot on.

“I spoke to a lot of drivers that have driven these cars – Andy Priaulx and Yvan Muller, and they all said the same thing. They told me that they were fun to drive, hard to drive as well,” he said.

“It was basically what I expected – very heavy. It’s got lots of power, good braking, tricky in the corners, and there’s big tyre degradation as well, so it’s not an easy car to drive, but lots of fun.”

Monteiro says that while the Winton track isn’t the most glamorous race track he’s ever been to, it is a good circuit to get his head around driving these cars.

“It’s quite narrow and quite bumpy, but you get this style of track in Europe as well,” he said.

“We don’t race at those tracks anymore, but you do test there, and you’ve just got to deal with it. This type of track helps you prepare quite well for the street races. It’s bumpy, big kerbs and there’s not many room for mistakes either. The walls are quite near. At the end of the day, it’s very good preparation for the street track.”

Monteiro will get more laps around Winton tomorrow as Centaur Racing will remain at the rural track for one of its four allocated test days.