McFadden stars amid controversy in Darwin

McFadden stars amid controversy in Darwin 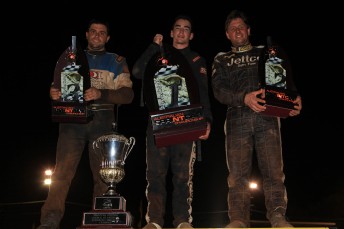 For the past twelve months James McFadden has been knocking on the door of stardom on the Australian Sprintcar scene.  Last night in Darwin he became the star.

McFadden added his name to an illustrious list in Australian Speedway by claiming the victory in one of the most thrilling Australian Championship Finals for a number of years.

The Northern Territorian, now domiciled in Queensland, had been among the pacesetters all throughout the weekend before making the most of his opportunities in the 40-lap championship final.

McFadden inherited the lead on lap 24 after early race leader Ryan Farrell, who was running second at the time, collected Kerry Madsen whilst trying to execute a slidejob, sending Madsen careering into the wall before flipping violently.

Madsen was furious with the move and remonstrated with Farrell who was sent to the rear of the field.

The demise of Madsen, and effective end of Farrell’s title hopes, allowed McFadden to take up the front running ahead of a quartet of unsung heroes of the sport Stephen Bell, Jamie Maiolo, Matt Egel and Trevor Green. 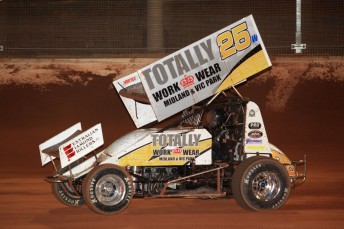 James McFadden on his way to victory in the Valvoline Australian Sprintcar Championship. Pic: Paul Carruthers

Mcfadden maintained his advantage aboard the Scott Milling-owned Totally Workwear entry for the remaining 16 laps with Bell and Maiolo rounding out the podium.

“I had a good car throughout and thought I could keep up. It sucks for those guys (Madsen and Farrell) but it’s good for me,” said McFadden.

“I’ll have to step up my game a bit now I’ve got the number one on my car.

“I’d like to thank Scott Milling who without I wouldn’t be here, the same can be said for my Mum and Dad who’ve been with me the entire way from the go-kart days, unfortunately Mum had to head home but she was a big part of this.

“Big thanks must also go to Kenny Mac from KRE engines, the guys from Totally Workwear and everyone else that’s helped me throughout my career.”

Farrell charged back into sixth ahead of Brooke Tatnell, defending champion Garry Brazier, Jamie Cobby and Max Dumesny who rounded out the top ten.