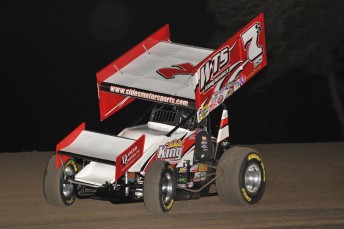 Tennessee’s Jason Sides beat home the winningest driver in World of Outlaws history, Steve Kinser, on route to victory at the Tri-City Speedway in Franklin, Pennsylvania on Sunday night.

With a huge crowd in attendance for the inaugural World of Outlaws event at the venue Sides lined up alongside Kinser on the from row for the 25-lap main event in the Wetherington Tractor Service Maxim.

After taking over the front running on lap nine Sides was forced to fend of several late race challenges from Kinser in the Bass Pro Shops Maxim for Tony Stewart Racing before taking his second win of 2010.

“Anytime you can win, whether it’s once a month or two or three in a row is good,” said Sides.

“Another win for us is great. It was another good night for us. Doug (Rankin) works so hard and it’s a great night for all of our sponsors as well.”

The race going went flag to flag meaning the leading duo found themselves in lapped traffic for the majority of the race, something that would usually assist Kinser given his plethora of experience.

“It really was surprising, but I’m glad it did because it kept us in traffic,” said Sides of the caution free race.

“When I could clear some of the traffic it made me like I had a little leeway before Steve got to them or past them.”

Dale Blaney, who began the night by turning the fastest lap in time trials, scored his best World of Outlaws finish of the season coming home third in the Ti-22 Performance Maxim ahead of Lucas Wolfe.

Donny Schatz, the four-time and defending World of Outlaws champion, came all the way from the 17th starting spot to finish fifth aboard the Armor All/STP J&J ahead of Jason Meyers and the current points leader Joey Saldana.

Andy Priest, who was second fastest in time trials, scored the best finish of his career with the World of Outlaws coming home eighth aboard the Priest Enterprises Maxim with Danny Lasoski ninth and Jac Haudenschild rounding out the Top Ten.

Kinser’s runner-up placing moved him into second in the points standings as he chases an unprecedented 21st World of Outlaws crown.

World of Outlaws Championship Standings through May 30