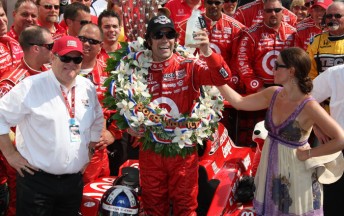 Scotsman Dario Franchitti has won his second Indianapolis 500 in a dominating performance by the Target Chip Ganassi driver.

The win means that team boss Chip Ganassi becomes the first owner in history to hold both the Daytona 500 and Indianapolis 500 titles at the same time.

Franchitti smashed the opposition at the Brickyard today, but he had to survive a hectic final phase of the race to collect the win, as drivers and teams were forced to switch to aggressive fuel conservation strategies to make it to the finish.

In the second half of the race it was Tony Kanaan that was the biggest threat to Franchitti’s dominance, an amazing feat for the Brazilian, who started from 33rd position.

But with the likes of Kanaan, polesitter Helio Castroneves and Justin Wilson all forced to make splash-and-go pit stops in the final stages, Franchitti was left to hold off the rapidly advancing Dan Wheldon in the final laps.

Running painfully slow with even backmarkers passing his #10 Target car, Franchitti looked to have Wheldon covered, but his win was assured when the yellow flags flew for a horrendous crash on the last lap of the race.

Mike Conway rode over the back of Ryan Hunter-Reay’s car at Turn 2, sending Conway’s Dreyer & Reinbold Racing car up into the air and into a sickening sequence of flips along the catch fencing.

Franchitti, who will race at the Armor All Gold Coast 600 in Queensland later this year, led a massive 155 of the 200 laps in today’s race. Incidentally, four of the top 10 drivers at this year’s Indy 500 will all race in V8 Supercars in Surfers Paradise this October.

Third place was Marco Andretti, making it a great day for Andretti Autosport after a wretch month of May at the Speedway. Andretti had to sweat it out in the hours after the race after crossing the line in sixth place, but quickly claiming that several cars passed him under yellow – a claim backed up by officials post-race investigations.