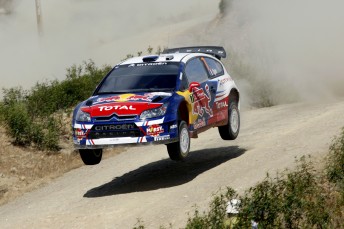 Sebastien Ogier is on track for his maiden victory in Portugal. Pic: GEPA pictures/ Citroen

Citroen Junior Team driver Sebastien Ogier is on track to land his maiden victory in the World Rally Championship at the Vodafone Rally de Portugal.

Despite an unfavourable road position as the first driver to tackle the stages, Ogier was able to maintain his place at the top of the timesheets during the second leg.

“It was a great day and we managed to limit the damage well,” commented Ogier.

“When you are first on the road you have to adapt your driving style by braking earlier, not sliding the car too much and just driving as cleanly as possible.

“We were able to take time out of everyone apart from Seb. We also managed to look after our tyres while keeping up a good pace. Tomorrow, we will be first on the road again. It’s not going to be easy, but we’re going to keep going with the aim of finishing the rally first and foremost.”

With the final leg being the shortest of the event, Loeb fears he may not be able to prevent Ogier from taking victory.

“I have to push tomorrow but the gap is big and he is going very well,” said Loeb.

“We are only second on the road tomorrow so it won’t be easy to make a difference. He was running very well but at the same time saving nicely his tyres. I was too cautious for the tyres and lost too much time.”

Petter Solberg returned to end of day service in Faro in third place in his privately-run Citroen C4. He started the afternoon loop 10.5 seconds down on Dani Sordo but moved in front when the tyres on the Spaniard’s C4 became badly worn and he had to slow.

Solberg also reported excessive tyre wear – caused the by the hot temperatures and abrasive stage surface – and starts the final day 52.2 seconds adrift of the leader.

Mikko Hirvonen is fifth and the leading non-Citroen driver in his works Ford Focus with Henning Solberg sixth, in a semi-works machine, after recovering from earlier fuel pump problems.

Ex-Formula One driver Kimi Raikkonen remains on course for a points finish in the second Citroen Junior Team C4 after surviving an off approximately one and a half kilometres from the end of the final stage.

In the corresponding event last year Ford driver Jari-Matti Latvala crashed out in dramatic fashion by rolling his car 20 times. He will again sit the out the final day after he crashed out after hitting a tree.

“The third bend on the stage was flat out and led into a right corner,” explained Latvala.

“I was a little late turning into the second corner and hit a bank. The car started to spin and hit a tree about 40 metres from the road. The rear of the car took the impact and was too badly damaged to continue. I knew as soon as I hit the tree that the day was over.”

The final leg of the event incorporates four gravel stages plus a second run through the Tarmac-based superspecial stage in Estadio Algarve ahead of the ceremonial finish.