That figure put Stokes 11th on this year’s listing, which was topped for the first time by Westfield boss Frank Lowy with wealth of $5.04billion.

In part due to the recent merger of his Seven Network and WesTrac Group assets, Stokes has seen his value rise substantially in the last 12 months.

Consolidated Media Holdings, the publically listed company inherited by James Packer from his late father Kerry, is a part-owner of Premier Media Group, owners of pay television network Fox Sports, which regained the rights to show replays of V8 Supercar races in 2010.

Coates Hire is a sponsor of the V8 Supercar Championship Series, while WesTrac is a backer of Ford Performance Racing. The Seven Network holds the V8 Supercars telecast rights until the end of the 2012 season.

Lindsay Fox is the next motorsport mogul on the list, owner of the Phillip Island Grand Prix Circuit, not to mention arguably Australia’s finest classic and exotic car collection. Australian Grand Prix Corporation chairman and former Fairfax chairman Ron Walker is next, just ahead of Tony Perich, who recently closed his Oran Park Raceway on the outskirts of Sydney to make way for a massive housing development of over 8000 homes as well as a retirement village.

The Perich family also owns Freedom Nutritional Products and an enormous dairy farming operation on the expanses of land held by its Leppington Pastroral Company west of Sydney.

John Longhurst, father of former Bathurst winner Tony Longhurst, is a long-time inclusion in the BRW 200, having developed and subsequently sold the Dreamworld theme park on the Gold Coast. He continuies to own the Logan Hyperdome shopping centre located between Brisbane and the Gold Coast.

Rob Gerald, founder of Gerard Industries, owners of the Clipsal electrical brand, again features on the list despite a rough couple of years. Gerard’s son Simon continues to run Gerard Industries, with Clipsal continuing its long association as naming rights sponsors of the hugely successful Adelaide event on the V8 Supercar calendar.

Brothers Peter and Stephen Hill may be in their late 40s, but they still enjoy a huge stake in the lucrative youth and skate clothing market as well as dabbling in GT racing. The duo owns an array of brands including Globe and Gallaz as well as distribution rights for labels such as Birdhouse and Chocolate. Globe is also a personal sponsor of Jack Daniel’s Racig driver Rick Kelly. 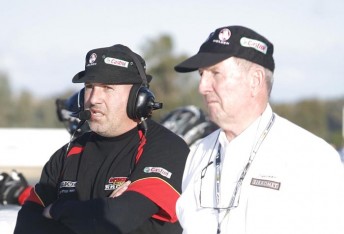 Harold Mitchell is well known in the media and sporting communities, as owner of the Mitchell Communication Group as well as holding the Chairman’s role at the new Melbourne Rebels Super 14 team. Mitchell boasts V8 Supercars Australia as a client for media buying and other duties.

Terry Morris, father of V8 Supercar team owner Paul, is the last motorsport personality to make the BRW 200 list this year. His wine company Sirromet is an ever-present backer of Paul Morris Motorsport and Morris International also owns the building leased by V8 Supercars Australia for its Gold Coast headquarters.

Aviation magnate Paul Stoddart fell out of the BRW Rich 200 in 2010, with the former Minardi F1 team owner dropping off the listing due to falling valuation as a result of the stronger dollar.

Another who narrowly missed the cut in 2010 is Gerry Ryan, owner of Jayco Caravans. Valued at $180million, Jayco is a long-time sponsor of V8 Supercar teams and current backer of Fujitsu V8 Supercar Series front-runner David Russell.