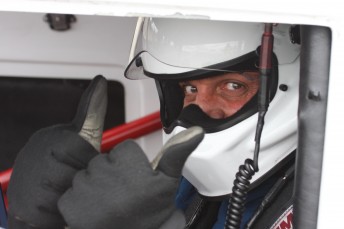 Current Top Doorslammer championship leader and two-time title runner up Robin Judd has declared the ‘bridesmaid dress’ well and truly worn out as he heads towards the season-ending Castrol EDGE Winternationals (June 10-13) nine points ahead of reigning Champ John Zappia.

The Queen’s Birthday long weekend event will be held at Queensland’s Willowbank Raceway in Ipswich, and is the largest drag racing event outside of the US as well as the season finale for the ANDRA Pro Series.

The West Australian racer has been runner-up to the title twice before, most recently to fellow sand groper Zappia in 2009, and while a nine points margin means absolutely anything can happen in two weeks time, Judd will be doing everything he can to make sure he comes out on top this time around.

“It is going to be a real dogfight,” said Judd.

“We have had enough of the bridesmaid tag, and we will be trying our best to get the William Buck K & B Exclusive Studebaker into the top spot .

“I expect some tough competition so we will have to be on our game. Needless to say, the team and I will be trying our best to put on a great show.

“The racing in Doorslammer can be very unpredictable at times and anything can happen, it should be a massive weekend – preparation will be the key, and you ca be assured all of our team  will be giving it our best shot to bring it home.”