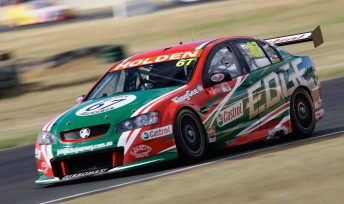 Tim Blanchard was given his second test in a Paul Morris Motorsport Commodore at Queensland Raceway yesterday.

The 22-year-old Fujitsu V8 Series rookie was invited by the Norwell-based V8 team to drive PMM’s ‘Kulwicki’ chassis that Paul Morris took to a race win in the second round of the Fujitsu Series at QR recently.

Blanchard was given an opportunity in Greg Murphy’s Castrol EDGE Commodore VE in the Friday morning co-driver session at Winton two weeks ago, backed up by yesterday’s test in the older PMM chassis.

At this stage, Murphy is still without a confirmed endurance driver partner. Yvan Muller, currently pencilled in for the seat, is yet to get clearance from his World Touring Car team Chevrolet due to the tight calendar clash around the L&H 500 at Phillip Island (two rounds of the WTCC are scheduled either side of the race).

With the team keeping its options open, Blanchard was happy to get more miles during his rookie V8 season.

“After Winton, Paul asked me to come up and have another test,” he said.

“It was just about coming and have an opportunity to do some more laps. It’s nice to be on the radar of a Main Series team, and it’s encouraging to have someone like Paul Morris helping me out. It’s pretty significant at this stage of my career.

“It was also interesting to see how Russell (Ingall) and Greg (Murphy) operate (ED: Ingall and Murphy were testing as well). They’ve all been in the industry for so long and it was good to see how they approach things.”

Zukanovic, making his return to V8s this year after a massive testing crash at the start of 2009, was pleased to get more miles in a different car.

“”It was a chance to drive another car and get some other miles,” he said.

“I really like the car. It handles quite well, and I was in the ball park in terms of lap time. To get to drive one of Paul’s cars was great. I haven’t driven that many VE Commodores, so it was nice for a change.”