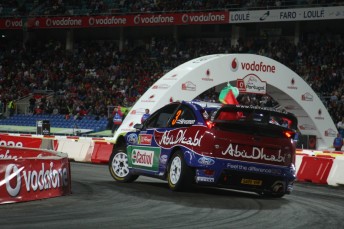 In front of thousands of fans in the football stadium, the Finn got plenty of local support with a Portuguese flag flying from the car’s aerial.

“It’s a great way to start the rally!” said Hirvonen.

“Okay, it’s only a short stage but it’s always really nice to win – and a big pleasure to beat Sebastien Loeb!

Tomorrow is when the real action starts, though.”

Drivers face six gravel stages during the completion of Friday’s opening leg in the Serra do Caldeirão hills, north of Faro. The rally itself totals 18 stages covering 355.32-competive kilometres.