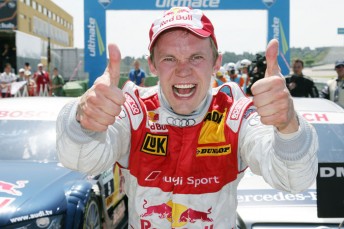 The test comes just days after the team confirmed that the Red Bull NASCAR team’s lead driver, Brian Vickers, will be sidelined for the rest of the 2010 season as he is treated for blood clots in his veins.

Ekström, 31, visited the Red Bull NASCAR team back in 2008 and will now get his chance to get behind the wheel of a Sprint Cup car in the #83 Camry recently vacated by Vickers and driven by Casey Mears at the past two races at Dover and Charlotte.

The Swede races a Red Bull-backed Audi in the European-based DTM championship, where he is a two-time series champion.

Vickers and Red Bull Racing Team Vice President and General Manager Jay Frye held a press conference at Charlotte Motor Speedway over the weekend to confirm that the 2009 Chase contender will miss the rest of the 2010 season.

At that press conference, Frye backed Casey Mears as the man most likely to drive the team’s #83 entry for the rest of the season as team-mate to Scott Speed.

But at the time rumours surfaced that the team could consider ‘road course ringers’ for the Sprint Cup races at Infineon Raceway on June 20 and Watkins Glen International on August 8.

Despite rising through the ranks of North American open-wheel racing via Indy Lights and Champ Car, Mears has failed to star at NASCAR road course events, scoring just three top 10 finishes and no top 10 starts from 14 Sprint Cup starts on road courses. Brian Vickers won pole at Infineon Raceway last season. This year someone else will drive the #83 Red Bull Camry

Ekström’s DTM commitments would not clash with the Infineon race, coincidentally where Vickers won pole last season, but would rule him out of the Waktins Glen event due to Round 5 of the 2010 DTM series at the Nurburgring in Germany.

“With Brian Vickers sidelined for the rest of the season, we needed a road-racing expert to help prepare the No. 83 for Sonoma,” said Frye.

“We appreciate Mattias’ willingness to help out and we look forward to his insight.”

Ekstrom, a Red Bull-backed driver for the past nine years, scored his first victory for the season in Sunday’s second round of the DTM Championship in Valencia, Spain, putting him second in the points standings.

Ekström has also represented Red Bull in the World Rally Championship with distinction, raced sportscars for Audi and claimed victory at the annual Race of Champions event.

“It’s no secret that the NASCAR series fascinates me,” said Ekstrom.

“It’s been a long-harbored dream of mine to drive such a car.”

If Ekström was to get a chance to race in NASCAR, and win, the video below proves that he would have the victory burnout well and truly sorted.