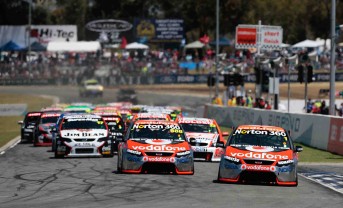 Four V8 Supercars teams will make the trip across to West Australia this year, even though there is no official V8 Supercars meeting there.

TeamVodafone has booked out Barbagallo Raceway on Monday June 7 and has invited all V8 Supercar fans to join them. It will be the first time that WA has seen the team’s new Commodore VEs.

The ride day is for major sponsor Vodafone, although two lucky individuals will be rewarded with a hot lap around the 2.42km circuit alongside reigning V8 Supercars Champion Jamie Whincup.

“I love the city of Perth and really enjoy my time there,” Whincup said.

“As soon as we found out we weren’t racing at Barbagallo I instantly thought of the WA fans. It’s great the team have come together to organise this fantastic event.

“I am going to really enjoy it. I get to drive the race car and catch up with everyone without the stresses of a race meeting.”

Limited team merchandise will be available for purchase on the day.

The following day, an evening has been organised called the ‘Norton 360 V8 Perth Challenge.’ The evening is only open to invited members from Ford Performance Racing and TeamVodafone’s fan clubs, Lowndes Force members and Norton 360 members. Drivers present will include Mark Winterbottom, Craig Lowndes, Whincup and James Moffat.

Also, GRM will head over to WA to complete a ride day at the AHG Driving Centre. The team will take both its drivers and cars, giving laps to guests at the driving centre facility.

Toll Holden Racing Team drivers Garth Tander and Will Davison are also expected to visit the western fans in the coming weeks.

The V8 Supercars Championship Series was scheduled to head to West Australia this weekend, but due to a number of issues, V8SA and track organisers could not come to an agreement.

Speedcafe.com.au reported two weeks ago that fruitful discussions are taking place at the moment to see the series return to a revamped Barbagallo Raceway in the future. CLICK HERE to see that story.