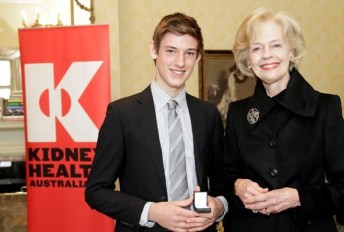 Brabham, who is this year competing in the Genuine Ford Parts Australia Formula Ford Championship, was presented with his special Gold K and announced as Kidney Health Australia Young Ambassador by the Governor-General of Australia and Kidney Health Australia’s Patron in Chief, Ms. Quentin Bryce AC during a special ceremony at Admiralty House in Sydney today.

“It was an awesome experience today to go Admiralty House and meet the Governor-General,” said Brabham.

“To be recognised as a Young Ambassador for Kidney Health Australia is a great honour and something that I remember for a long time to come.

“At the end of the day your health is the most important thing in your life and the message from me is to start looking after yourself at an early age and you have a much better chance of living a long and healthy life”.