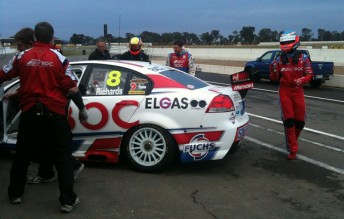 Brad Jones Racing and Ford Performance Racing were at the rural circuit, with BJR deciding to cancel its general test, turning it into an evaluation day for its endurance drivers Matt Halliday, Andrew Jones and David Wall. Also turning some laps for the Albury-based team was Fujitsu Series driver Drew Russell.

FPR elected to press on with its test day, despite the wet weather that arrived at around 1pm, lasting for a couple of hours.

V8 Supecars teams only get four test days each season.

BJR team owner Brad Jones told Speedcafe.com.au that his team decided to bench its regular testing schedule to evaluate its endurance drivers in the mixed conditions.

“It was too risky, to tell you the truth,” Jones said.

“Once we saw the weather forecast, we thought it was too risky to conduct a general test day.

“Matt Halliday, David Wall and Andrew (Jones) had a run in the car, and we’ve also given Drew Russell some laps as well.

“They’ve all gone pretty well. It’s been wet and dry, but Matt flew all the way out from Los Angeles, so it was good to give him a run in the wet and dry. That’s given him a bit of a go at everything.

“It was a great day in that we just kept on banging around, whether it’s been wet or dry. Everybody has got a reasonable amount of laps.”

At FPR, team principal Tim Edwards said that the five hours of dry testing in the morning was adequate for the factory team to get through most of its testing program.

“Out of the day, we probably had four or five hour of dry running, it wasn’t a total wash out,” he said.

“The test was good. We would have preferred more dry track time, but we got through 60 or 70 percent of our test program. It’s been quite beneficial. We’re all testing up here next week as well, so we’ll be able to use this as a good base for then.”

Mark Winterbottom, Steven Richards, Paul Dumbrell and James Moffat were present for FPR, with its other endurance men Luke Youlden and Dean Canto set to join the team in its next test next Monday.

Joining FPR and BJR at Winton next Monday will be Jack Daniel’s Racing/Kelly Racing and Centaur Racing.