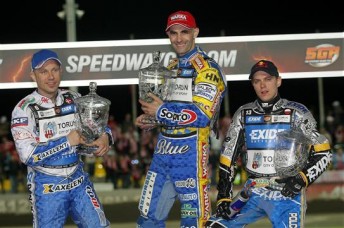 Gollob looked to be staring down the barrel of disappointment after taking third places his opening two outings. But he rallied with a victory in heat 12.

He then produced the move of the night to blitz around the boards and pip Andreas Jonsson to the line in race 14. A second spot behind Australian Jason Crump in heat 19 was then enough to fire him into the semis with eight points.

Gollob was involved in the night’s major talking point in semi-final one when Jonsson fell as the world No.2 dived under him on lap one, turn three.

Despite television footage showing the 39-year-old had touched the Swede, Jonsson was excluded. Gollob went on to win the re-run of the semi-final, and eventually, the final.

Gollob is now just three points behind World Championship leader Kenneth Bjerre and one behind Hampel in second.

Crump finished fourth in his semi-final to now sit fourth in the championship standings while fellow Aussie Chris Holder is eighth.