Castroneves and Power in Indy qualifying 1-2

Castroneves and Power in Indy qualifying 1-2 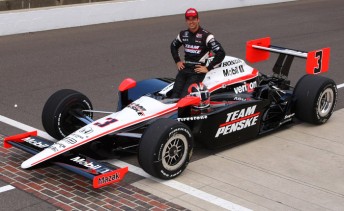 Helio Castroneves has scored his fourth Indianapolis 500 pole position in qualifying for The Greatest Spectacle in Racing at Indianapolis Motor Speedway today.

“It’s great to have a 1-2 start for Team Penske,” said Castroneves.

“It’s a shame that Ryan (Briscoe) didn’t have his chance on the last one. It’s great to be part of this team. We work so well together. I’m on the pole, but all three of us benefit from it. I’m very proud of my team; they did a great job today.”

Power admitted to applying Castroneves’ set-up to set his fast time and achieve his best ever Indy 500 starting position.

“It’s great to see the Verizon car on the front row and the Penske cars 1-2,” said Power.

“It’s pretty tough to beat Helio (Castroneves) at Indianapolis. He’s a quick guy. I’m happy with our starting position, and it’s good for the points.

“When I saw Helio’s time, I thought that’s crazy fast. But when I put the downforce level he had on a bit later, I was up there in the high 27s. I should have done that when it was warmer and the air was thinner, but that comes down to experience, and he has great experience here.”

Dario Franchitti denied The Captain the entire front row of the starting line-up by qualifying in third place for Target Chip Ganassi Racing, with Ryan Briscoe in fourth place.

Alex Tagliani continued to be the best of the non-Penske/Ganassi cars in a giant-killing effort in the small, first year FAZZT Race Team entry. 2008 Indy 500 winner Scott Dixon was sixth. 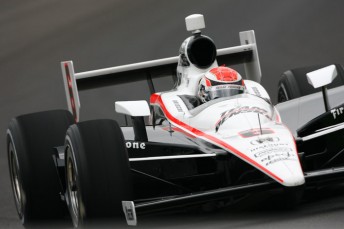 Will Power qualifies second at Indy

Hideki Mutoh for Newman/Haas Racing was ninth and another part-timer, Sam Schmidt Motorsports driver Townsend Bell, rounded out the top 10.

Dreyer & Reinbold Racing had all four of its entries qualify into the field today, with Ana Beatriz also earning the honour of the fastest female driver in 21st place.

It was a horror day for two teams in particular; Andretti Autosport and KV Racing Technology.

Tony Kanaan crashed early in the day in the 7-Eleven entry, ruling him out of the day’s qualifying and forcing him to qualify tomorrow for one of the positions from 25th to 33rd on the grid on Bump Day.

The best Andretti Autosport driver was Marco Andretti down in 16th position. Danica Patrick just scraped into the field today in 23rd place.

KV Racing Technology had a busy day, with Takuma Sato having a big wreck in the team’s Lotus entry, ruling him out for the day, while the team was able to repair Mario Moraes’ car after his crash, allowing him to qualify in 13th place.

See below video highlights from Pole Day and interviews with the top six drivers in qualifying and full qualifying results and drivers still to qualify below.