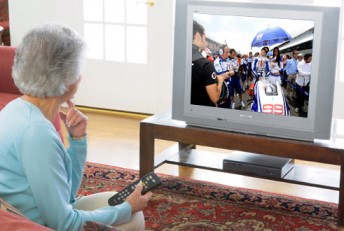 This weekend’s LIVE motorsport on Australian television centres around MotoGP and the NASCAR All-Star race:

MotorGP is exclusive to ONE HD and gets underway LIVE from 9.55pm on Saturday evening with qualifying for the French Grand Prix. Sunday night’s LIVE action gets underway at 6.45pm with 125cc, Moto2 from 8pm and the MotoGP of France starts at 9.30pm.

LIVE NASCAR gets underway from Lowe’s Motor Speedway in Charlotte on Saturday morning with the Truck Series race from 9.30am (AEST). Sunday morning features the Sprint Cup All Star Challenge LIVE from 9am.

Switch on Eurosport for coverage of the World Touring Car Championship (WTCC) from Monza LIVE at 8.45pm

You can also see V8Xtra, the Fujitsu V8 Series, AMA Supercross, Speedweek and NHRA action just to name a few. For full listing check out the TV Times section of Speedcafe.