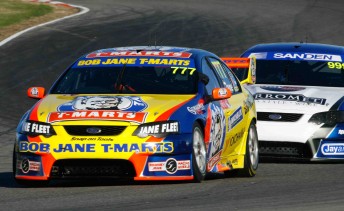 Sonic Motor Racing will not apply for a Wildcard entry into the V8 Supercars’ endurance races at Phillip Island and Bathurst this year.

V8 Supercars has opened up applications for non-regular V8 Championship Series entries to gain a spot on the L&H 500 and Supercheap Auto Bathurst 1000 grids.

As many as five Wildcard entries will be selected at the discretion of V8 Supercars.

Sonic Motor Racing, a leading team in the Fujitsu V8 Series team, has elected not to pursue a potential entry in the two twin-driver races as team principal Mick Ritter feels he could not execute it properly.

Last year, Sonic was selected as a Wildcard entrant, but due to circumstances, had to withdraw.

Ritter told Speedcafe.com.au that he would love the opportunity to compete at Phillip Island and Bathurst, but will only do it when the time is right.

“We wanted to, but we would have needed to be in a position by April this year, where we would need most of these boxes ticked and get on with the program to prepare for it properly,” he said.

“It is difficulty for us because both cars that we have in our factory are both our Fujitsu Series cars. Our drivers (Tim Blanchard and Rodney Jane) are both doing the entire Fujitsu Series, so to make it happen, we’d have to withdraw one of those cars from the Fujitsu Series, which is possible, but it’s not ideal.

“More than anything, we needed to be a position in April where we had two suitable drivers and the budgets to plan it so we could do the team and the drivers justice.

“It’s as simple as that, and as much as we’d like to do those races, I’m not going to risk anything to achieve it.”

As reported previously, Greg Murphy Racing, Matthew White Motorsport, Adrenaline Motorsport and Sieders Racing Team will apply for at least one entry each.

The Wildcards are also open to Championship Series teams who wish to enter an extra car in the endurance races, although V8 Supercars has said that regular Fujitsu V8 teams will be given first preference.