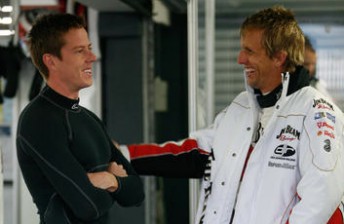 James Courtney’s V8 Supercars endurance race team-mate is going to be feeling the heat in September and October this year.

This year’s V8 Supercars Championship Series rules restrict regular drivers pairing together. For a once-a-year V8 co-driver, it has given them their best chance to win the ‘Great Race’ – the Supercheap Bathurst 1000 – but on the flipside, it has also placed extra pressure on their shoulders, as their actions will directly affect their team-mate’s championship chances.

And there will be no more pressure than that on Courtney’s team-mate. 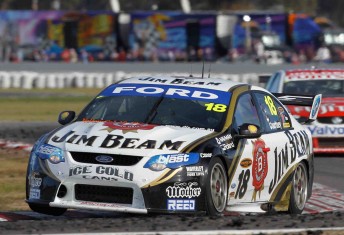 Warren Luff or Marcus Marshall have been selected to pair up with either Courtney or Steve Johnson, but the Jim Beam Racing team is yet to officially decide who will partner the title leader.

Luff has completed the past two Friday co-driver sessions in Courtney’s #18 car, which points towards him being the favourite for the drive.

“Regardless of who ends up with James, the pressure is there, but ultimately, the job of the co-driver is to do the job in the middle stint and give them back the car in the same condition that you took it over in,” he said.

“There’s no use going out there being a hero. It’s about being sensible. You’ve got to keep pace, but you’ve got to be smart about it.

“You don’t get a lot of glory for trying to be a hero, but you can easily make yourself look like an idiot.

“It adds a bit of pressure and expectation, considering the team is doing well, but if we have a quick car, it makes my job and Marcus (Marshall’s) job much easier.

Luff said that the vibe within Dick Johnson Racing is at an all-time high, with all three of its cars running competitively in the title.

“It’s been really good. Being able to win the last four races in a row, everyone is digging that little bit deeper,” he said.

“The team’s motivation is always high, but we’ve gone from having a car that was in the top five in the championship to leading it, and it has driven everyone to continue to push on.

“We want to try and maintain and extend that championship lead. Everyone is motivated and keen to get on with the rest of the year and continue the form that they have had all of this year.”

Marshall completed co-driver laps at Queensland Raceway, but was unable to make it to Winton due to another pre-arranged engagement.