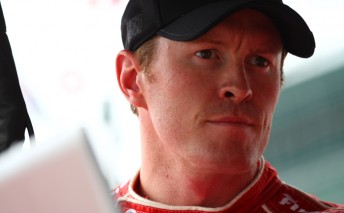 New Zealand’s Scott Dixon has topped the timesheets in practice for the Indianapolis 500 for the second consecutive day.

“Today was similar to the last few days where we were running the car in race set-up to find some mechanical grip and make it more predictable in traffic, and we were able to find some things, which were quite good,” said Dixon, who won at Indy in 2008.

“I know Dario (Franchitti, Target Chip Ganassi Racing team-mate) did the same, and his car looked pretty good in traffic, too. In the last 15 minutes of the day, we tried to trim the cars out. Nothing too crazy, but just to see where we stand. And surprisingly, it seemed pretty comfortable, pretty nice to drive and consistent. It gives a us a good benchmark to start tomorrow.”

Australian Ryan Briscoe was second on the timesheets on a day where the three Team Penske entries concentrated on race set-up.

His team-mates Will Power and Helio Castroneves were sixth and eighth respectively, with Castroneves still the owner of the fastest lap time of the month from his lap in Practice 2.

“We had a good, solid day,” said Briscoe.

“We were able to get quite a lot of work done on race setup-related items. The three Team Penske cars were able to take advantage of being a three-car operation, and we worked together on track today helping one another find speed and comfort. It really was a good day for the No. 6 car and for the whole team.”

Next Story Formula Ford leader to get first V8 test