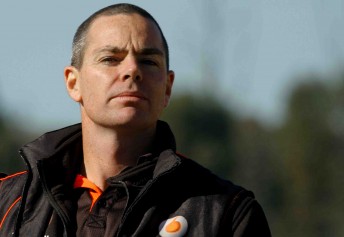 After an indifferent start to the season, Lowndes has finished the past four V8 races inside the top five, racing up to third place in the championship behind James Courtney and team-mate Jamie Whincup.

The popular TeamVodafone driver puts his sharp turn around to the Dunlop Sprint tyre, which was the only rubber used at Queensland Raceway and Winton.

However, the next round at Darwin will be crucial. Dunlop’s Control tyre returns, with only one set of Sprint tyres available to the teams for Sunday’s race.

“It will be interesting going back to the hard tyre,” he said.

“I love the Sprint tyre. It’s helps with the way I drive this car. We still need to get more consistent laps out of it. It’s a nice change to be up here (on the podium).

“Darwin will throw a bit of a mix up. Having the original tyre on Saturday and the soft tyre on Sunday will be quite interesting, trying to get the balance of the car right on both tyres.

“I’m in a good position now in the championship and have an opportunity to continue that.”

While Lowndes puts his top results down to the Sprint tyre, his endurance race co-driver Mark Skaife has a different theory on Lowndes’s form reversal.

“Skaifey reminds me that the two best results I’ve had this year, which have been the last two rounds, are times when he has driven the car on Friday,” Lowndes said.

“He reminds me that he helps me set-up the car!

“He and I are getting on extremely well. He’s comfortable in the car and he’ll do some more miles before we get to the long distance races.”