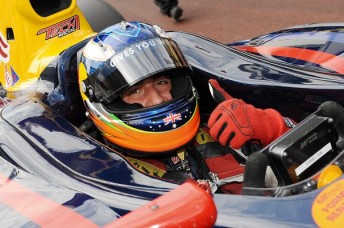 Carlin’s Mikhail Aleshin offered the West Australian Tech 1 a solid challenge over the course of the race, but would have to settle for second place.

“It was such a tough race, even though I led from the start and didn’t really have a fight with anyone, it was so exhausting,” Ricciardo told Autosport.

“Pushing for 45 minutes on a street circuit is something that I haven’t really done before.

“At the start I was really comfortable and the tyres were there straight away. In the middle of the race there were some incidents and yellow flags, and I was perhaps over-cautious not to receive any penalties. That allowed Aleshin to get a sniff. I probably over-killed the tyres a bit in the beginning, too.”

Albert Costa finished third ahead of Ricciardo’s team-mate place Brendon Hartley who started the race from eighth after a qualifying accident.