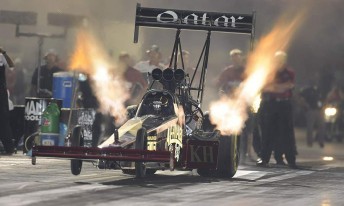 “I feel the same way [about tying Amato] as I do against the other people I grew up looking up to: Unworthy.

“Those were the guys growing up and to be able to reach a number that he got … well, I’m a few championships behind him still. The guys I looked up to didn’t get 23 chances a year to win.”

Hight took his second straight Funny Car victory, and 16th of his career, with a win over teammate Ashley Force Hood in the final, 4.18-seconds to 4.23-seconds. Force Hood is now second in the championship and Hight is one spot back. Legend and teammate John Force still leads the way.

“No matter what, we couldn’t lose, it was going to be a Force win,” said Hight,

“But to leave here 1-2-3 in points is pretty big right now, especially this early in the season. We were real happy with the way we finished last season and were looking forward to this year.

“This Ford Mustang has been unbelievable all weekend”

Jeg Coughlin took his 50th career win in Pro Stock; the ninth driver to do so in a Full Throttle-class.

The win came at the expense of a driver chasing his first Wally, Rickie Jones with a 6.65-seconds to a 6.68-seconds.

“I was fortunate to eclipse the 50-win mark – including my Lucas Oil wins – a few years ago and thought I was done with 50 but was reminded here lately of the next plateau,” said Coughlin.

To round out proceedings Andrew Hines took his 20th career win in Pro Stock Motorcycle with victory over Hector Arana 6.96-seconds to 7.04-seconds.