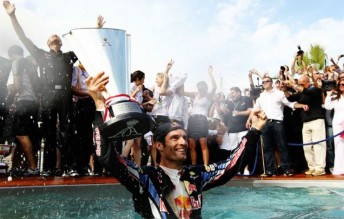 Mark Webber celebrates in the pool at Monaco

The win has puts Webber on top of the world championship standings, and made him the first Australian to lead the F1 title since Alan Jones in 1981.

Also, it’s the first time since Sir Jack in 1959 that an Aussie has won at Monaco. Brabham went on to win his first world title that year.

Brabham told Australian Associated Press that the win is a credit to him.

“I think he’s got a chance (of the championship) … the way he drove yesterday was absolute credit to him.“

Webber led home Red Bull Racing team-mate Sebastian Vettel, with the pair sitting equal on 78 points at the top of the driver’s table.

Jones said that Webber may even have his highly-rated team-mate rattled.

“He’s starting to really stretch his legs and I think he might even have his team-mate a bit worried now,” Jones said.

“He’s beaten him pretty conclusively on both occasions, he’s driven away from him.

“I think now with a bit of luck Mark might have a bit of a mental edge (over Vettel).”