Rick Kelly is aiming to convert his team’s first-ever pole position into its first race win today after a milestone qualifying session.

The 27-year-old told Speedcafe.com.au that he could not believe he scored pole, but is focused on the 67 lap race this afternoon. 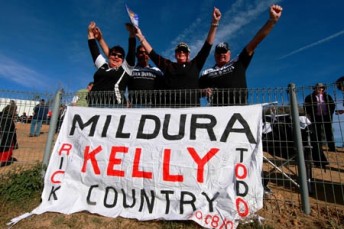 “The first set of tyres that I did a lap on, it just was there for us. I made a mistake – I made a big mistake, and I was a bit disappointed, but I managed to go out and fix it with the second set, so we’re all stoked.

“It’s the first pole for the team. We are very grateful for getting this and excited.

“We need to take our first win today. Yesterday I did a terrible job, so today I need to make up of that.”

Kelly finished 18th yesterday – his worst result in a thus-far consistent season. Today, he wants to right his wrongs.

“On Friday our Jack Daniel’s Commodore was very good. We made a couple of changes in the wrong direction for Saturday and it snow balled I guess and we had a very bad race. It was the worst race we’ve had all year by far,” he said.

“We needed to turn that around so it’s exciting that we’ve been able to do that as a team.

“Generally once you start a weekend off badly you tend to stay there, so it’s good to be able to turn that around but 67 laps around here is a long race so we will see how we go.”

Race 12 of the V8 Supercars Championship Series will start at 1.05pm today.