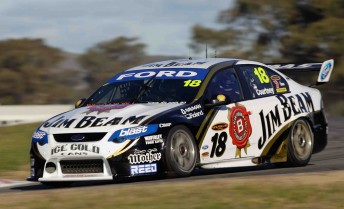 The Jim Beam racing driver kept his nose clean in the time-reduced race, picking exactly the right moment to pass TeamVodafone’s Craig Lowndes for the lead at turn four with seven laps remaining.

The race was reduced by four laps due to the Seven Network’s AFL commitments.

Lee Holdsworth grabbed his second podium for the year – adding to his Clipsal 500 podium place in March. The Fujitsu Racing driver had a faultless race – but the only blotch was a spin on the cool down lap!

Tim Slade, of Wilson Security Racing, stormed through at the end of the race with a great tyre strategy to grab seventh place – his best V8 Supercars result. Slade was the standout performer of the Stone Brothers Racing drivers, with Shane van Gisbergen in 12th and Alex Davison 17th.

Centaur Racing’s Tony D’Alberto notched together another great drive, finishing ninth – his third top 10 result in-a-row. The result was especially special, considering he was sent spinning in the opening lap biff and barge.

Rounding out the top 10 was The Bottle-O Racing’s Paul Dumbrell.