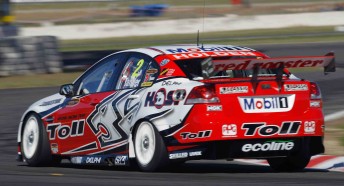 Race 11 of the 2010 V8 Supercars Championship Series at Winton Motor Raceway will not go down as a great one for the Toll Holden Racing Team.

The day started well enough, with both Garth Tander and Will Davison qualifying in the top 10, but things progressively got worse.

Tander made a lightening start from grid spot two and led the opening stages of the race but was delayed in his pit stop, which he says was set off due to a tight squeeze between his pit crew and TeamVodafone.

That incident dropped him down the field, but worse was to come on the penultimate lap when he ran into the side of team-mate Davison at turn 11.

Tander said the pair had been dicing hard earlier, however, the incident with barely a lap to go was unfortunate.

“With the tyres the way they were, and the amount of grip available, we made contact, which is obviously unfortunate for both of us.

“He came past me pretty aggressively a few laps earlier. I saw him and got out of the way, but this time he didn’t quite see. We’ve had a chat, and we’ve put it behind us and tomorrow is another day.

“It’s not ideal, but you put it behind you and that’s what we’ve done.”