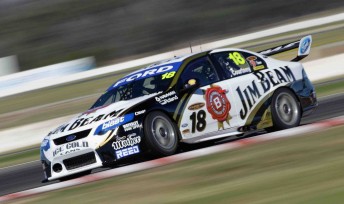 From pole-position, the Jim Beam Racing driver dropped to second behind the fast-starting Garth Tander at the beginning of the race, but when Tander encountered a slow pit stop, Courtney pounced and raced away to a big lead that could not be caught. It is Courtney’s third V8 race win in-a-row.

The only man who looked like threatening Courtney was TeamVodafone’s Craig Lowndes, who took second place after employing a later pit-stop strategy. He had speed to burn and raced from an effective 13th up to second.

Behind Courtney and Lowndes was their team-mates – championship leader Jamie Whincup and Steve Johnson.

Both Toll Holden Racing Team Commodores (Tander and Will Davison) looked like taking a top 10 place until they clashed on the penultimate lap while running ninth and 10th.

Mark Winterbottom and Jonathon Webb were also banging panels in the late stages which dropped the pair back down the order.

Supercheap Auto Racing’s Russell Ingall led most of the mid-section of the race, running the longest on his first set of tyres. He pitted late and rejoined right at the tail, but was able to race his way to an outstanding 11th place.