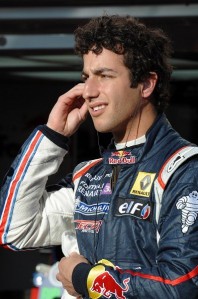 Daniel Ricciardo has taken pole position in his first visit to the Monaco street circuit in Formula Renault 3.5 today.

The 20 year-old racer put in a flawless performance to snatch pole in the dying minutes of qualifying.

With traffic always an issue around the tight Monaco street track, the Formula Renault 3.5 drivers were split into two groups for this morning’s qualifying session – and in his Tech 1 car, the West Australian was best of both groups.

A red flag halted proceedings with four minutes remaining, but once the session recommenced, Ricciardo seized the moment and put in a stunning lap to claim pole.

“This has to be the best pole position I have ever taken,” he said.

“It’s going to take a while to come down from this I think! We had a really good car and the team were on the radio to me saying if I had a clear lap I had the pace to take pole.

“Thankfully I had some space at the end of the session and was able to get a couple of laps in. Its going to be difficult tomorrow and there’s a lot that can happen during the race, but to be honest, I just want to enjoy this moment and make the most of being on pole position in Monaco.”

Formula Renault 3.5 drivers will compete in its one and only race at 11.10am (local Monaco time).