What was an F1 car doing at Winton?

What was an F1 car doing at Winton? Craig Lowndes with the McLaren at Winton yesterday

What was a Formula One car doing at Winton Motor Raceway yesterday?

A McLaren Mercedes Formula One car graced the rural Winton circuit yesterday as part of an upcoming Norton 360 promotion.

Craig Lowndes got up close and personal with the McLaren race car, although unlike his team-mate Jamie Whincup who got the chance to drive a similar car at Albert Park in March, Lowndes was there simply for a photo opportunity.

Lowndes, a Norton 360 ambassabor, was promoting a competition which will see him in the role of tour guide at the Belgian Formula One Grand Prix in August. 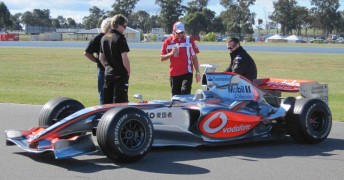 Norton is giving away a trip for four to Spa Francochamp race, hosted by Craig, plus a stop-over in Paris.

The competition is open to all current Norton Internet Security and Norton 360 users.

Valued at $50,000, the prize includes flights, transfers, accommodation, spending money, and paddock club passes – plus the chance to hang out with Lowndesy!

The competition ends on July 9th, 2010 and you can enter by going to www.europe.norton.com