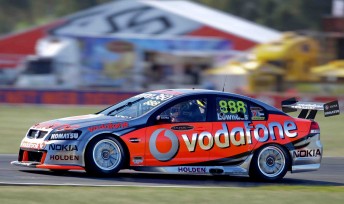 Craig Lowndes has ended the first day of V8 Supercars practice at Winton Motor Raceway on top of the time sheets after the four practice sessions.

The TeamVodafone driver set a time of 1:22.3376s, over a tenth of a second ahead of SP Tools driver Shane van Gisbergen. Rick Kelly was third in his Jack Daniel’s Racing Commodore VE.

Lowndes says that his early top spot fills him with confidence.

“It give us great confidence to know that the car is great on the Sprint tyre. We don’t know where we’re exactly at compared to the rest, but it’s is really nice to have a good car balance.

“There’s a few little tweaks we have to make, but yeah, I’m coming in with a lot of confidence.”

Championship challenger James Courtney, driving for Jim Beam Racing, finished the final practice session down in 19th – although he did not use brand-new Sprint tyres in his sessions.

Qualifying for tomorrow’s 11th race of the V8 Supercars Championship Series will be held at 11.20am, followed by the top 10 shootout at 12.25pm and the race at 3.35pm.