Drivers have conflicting views on Winton

Drivers have conflicting views on Winton 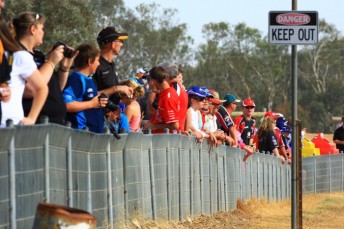 Some high profile V8 Supercar drivers have voiced differing opinions in the media about the future of Winton Motor Raceway on the series schedule in preparation for this weekend’s sixth round of the championship at the rural Victorian venue.

TeamVodafone star Craig Lowndes has voiced his concerns about the standard of the 3.0-kilometre circuit in his weekly column for News Limited newspapers.

“A few years ago it had an upgrade with an extension and new pits but I hate to say, it needs much more,” Lowndes wrote for News Limited.

“V8 Supercars has simply outgrown it.

“It’s a great circuit for open-wheelers, historics and motorcycles with its multi-directional changes.

“But we never get into top gear here and it’s too narrow for passing, so we don’t get to showcase our V8 race cars.

“Our category is a lot more professional these days with multi-million-dollar transporters and race cars, merchandise and team presentation, but some tracks just aren’t keeping pace.

“When you compare Winton with some of the circuits in the Mid-East and our own street circuits, such as Adelaide and Townsville, it just doesn’t stack up.

“I’d like to see it developed rather than scraped because we still get a fantastic crowd there.”

In contrast to Lowndes’ stinging assessment of Winton, Jack Daniel’s Racing team-mates Todd and Rick Kelly told The Shepparton News that they felt strongly about the survival of country rounds on the championship calendar.

“The category has grown a lot over the years but a big part of where we have come from is tracks like Winton,” Rick Kelly told The Shepparton News.

“I think it’s important that we do grow in the big cities with the street circuits. That’s been a critical part of the development of the category.

“But we also need to keep the variety of the rounds like Winton and others that are the bread and butter of V8 Supercars and it’s important to support the dedicated motorsport tracks we’ve got so that we can support the permanent facilities that we have around the country, as well as the street circuits.

“The Winton event brings a lot of people from surrounding districts down to watch the race and a lot from Melbourne and Sydney as well. It’s still quite a popular event for the series.” Todd Kelly was also supportive of Winton as a country stop on the V8 Supercar schedule, with both Kelly brothers originally from Mildura, Victoria.

“It’s fantastic that we go to such a varied schedule of events,” Todd Kelly told The Shepparton News.

“With all the events we go to it’s the same show, in terms of what we produce with the racing, but the crowd and the feel of each event is always completely different.

“We’ve got the massive events with the big corporate presences like in Adelaide, Sydney and the Gold Coast. Then there are events like Darwin, which combine a big event with a more regional feel. Bathurst is special all on its own but events like Winton still have some tradition as well.

“When you get to the track early each morning you can smell all the campfires and see all the fans rugged up holding their thermos. For a country boy like me it almost makes you feel at home.”

“They are forever trying to improve their facility … I give the Benalla Auto Club full marks for what they do there with a very limited budget,” said Cochrane on BigPond Sport.