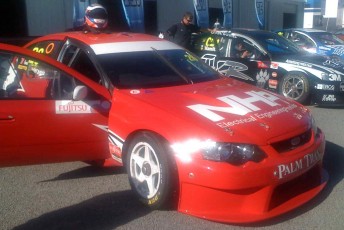 Fujitsu V8 Series rookie standout Ant Pedersen was almost a non-starter at this weekend’s third round at Winton Motor Raceway.

On Wednesday, the young New Zealander was resigned to the sidelines due to a shortfall of budget, but a late deal with electrical engineering supplier NHP rescued his ride.

The Matthew White Motorsport driver, currently third in the Fujitsu Series, told Speedcafe.com.au that NHP’s sponsorship was the key to his presence at Winton.

“It’s all down to NHP coming on board, and it’s fantastic that we can be here and continue the run that we’ve started. Hopefully we can get another positive, strong result this weekend,” he said.

“It has been a dream start to my rookie year – it really has been. It would have been frustrating to not be out here, but that’s behind us, we’re here, and we’ve got to make the most of it.”

Despite the strong start to the year in the first two rounds, Pedersen says that he still has a great deal to learn in the category.

“We’re still a long way off where we need to be,” he said.

“A few people have said I should be looking at the championship but that’s far from where I’m thinking. There’s a lot to learn and a lot of pace to find. I think there’s still a long way ahead.”

With eight-weeks between Winton and the next round at Townsville, Pedersen has some time to find more sponsorship to continue his run, but is also hopeful of securing a ride in this year’s V8 Supercars endurance races.

The Kiwi said that he is aiming at locking in a drive with Matthew White Motorsport’s Wildcard entry.

“I’d love to be involved in the endurance races. I want to be in the Main Game one day, and a good way to start is to drive in the enduros this year,” he said.

“There’s no way anyone’s going to give me a chance if I haven’t been involved in it, and a Wildcard entry with Matthew White would be a good start. It would be a car that I know and an environment that I know and would take a lot of pressure off.

“Being in the Main Game is where I want to be, but I’ve got to remain realistic. My dad raced V8s back home in New Zealand, and back there, V8 Supercars has a big ‘wow factor’ surrounding it. Everyone loves them, and it’s what I’ve wanted to do since I was a kid.”